On April 24th 2019, LiteBit.eu will be delisting five coins from its exchange. The most popular one amongst them is Vertcoin (VTC) which faced 51 percent attack few months back and made exchanges loose a lot of money. Other four coins are Breakout, Breakout Stake (BRX), Revolution VR (RVR) and Pinkcoin (PINK).

While LiteBit has not specified the reason behind the delisting of Vertcoin and others, we believe it is a combination of very low volume and the recent 51% attacks where a lot of money was stolen from exchanges through VTC. Of course we know that problem is more or less fixed but it doesn’t mean that the cryptocurrency exchanges hasn’t taken a very hard blow from it. 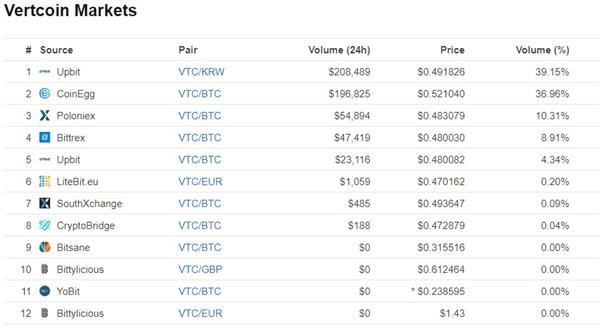 Also, Vertcoin deposits take 600 confirmations which is another headache for exchanges. This transactions take days to transfer to clients which results in poor user experience.

LiteBit is a fairly small exchange compared to something like Bittrex, that continues to support Vertcoin despite the 51% attack. However, since LiteBit is listed Coinmarketcap, it will definitely have an effect on VTC’s ranking since many Europeans used it for buying Vertcoin.