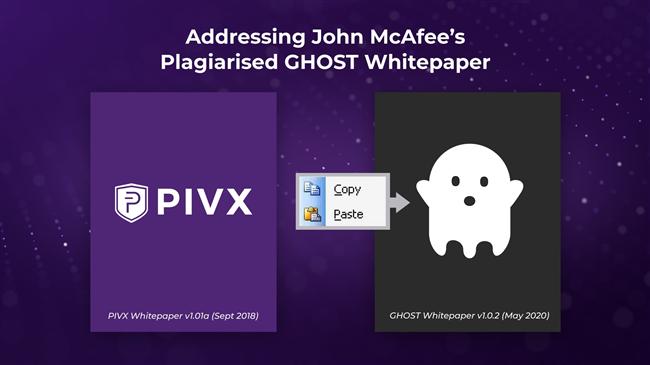 John McAfee has unveiled whitepaper of cryptocurrency, GHOST but has recently come into controversy with PivX team that claims GHOST’s whitepaper has been copied from 2018’s PivX whitepaper.

This is what PivX had to say,

“The PIVX Community has recently made us aware of John McAfee’s GHOST project. After a detailed investigation, it is obvious the GHOST whitepaper was plagiarized extensively from an outdated 2018 PIVX whitepaper.”

“As an expert, dedicated team that has been pioneering and tirelessly developing a privacy centric Proof of Stake blockchain since 2016, #PIVX is extremely disappointed to see John McAFee blatantly plagiarizing the Sept 2018 PIVX whitepaper.”

Based on what McAfee and his team have published so far, we can confirm that there are many similarities between GHOST and PIVX. Their coin specs, feature set, and protocols mentioned, all align with PIVX’s specifications and the recently announced new privacy protocol (Sapling/zk-SNARKs) that is currently being implemented.

PivX team has clarified that we have NO affiliation/association with the GHOST project, and have had no contact up to this point. Their current whitepaper, if implemented into a codebase, possesses several critical issues.

PivX team has found multiple instances where GHOST used exactly the same wording, structure and content flow found in the 2018 PIVX whitepaper. This can be seen here (pages 2, 7 in the GHOST whitepaper). 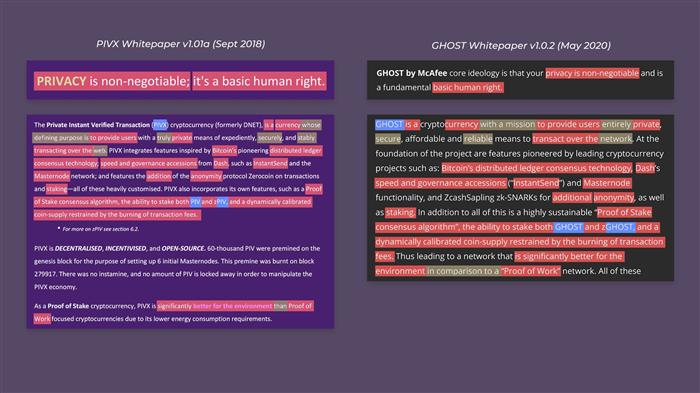 And here where the GHOST coin specs are an identical 1:1 copy (pages 8, 9 in the GHOST whitepaper). 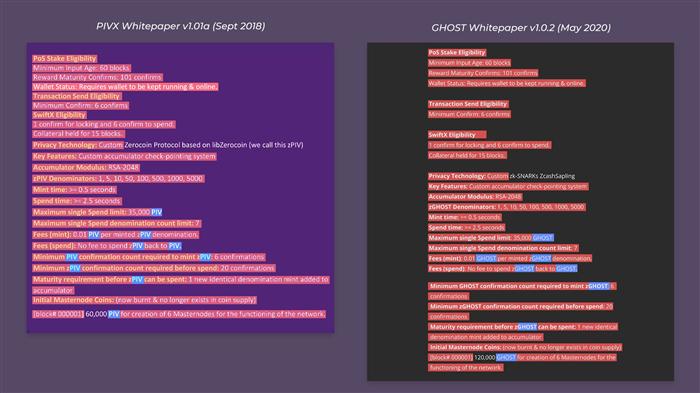 PivX do not know what code base Ghost is forked from yet, but given the above, it is most likely PIVX. At least 20 of the 26 total pages (not including front and back covers) found in the Ghost whitepaper contain material directly plagiarized from the 2018 PIVX whitepaper.

Please note this important point: PIVX expects to complete implementation of the new Sapling /zk-SNARKs privacy protocol in Q4 2020. As such, if Ghost is indeed a fork of PIVX, it will either be waiting for PIVX to complete the privacy code or will use its own solution.

Although Ghost states it will use Sapling/zk-SNARKs, the Ghost whitepaper references obsolete Zerocoin Protocol specifications. For example, Sapling does not use any RSA-2048 accumulators and denominations as referenced by GHOST on pages 8 and 25.