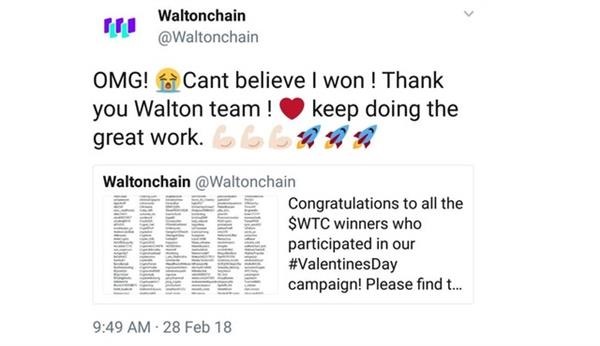 Few days back, Waltonchain did a Valentine day contest whose winners were announced yesterday. Little did the Waltconchain team know that this contest would turn out to be biggest PR nightmare. Immediately after announcing the winners on twitter, the team member forgot to chain the account and tweeted out a thank you tweet for making him/her a winner.

This is what was written in the now-deleted tweet.

Today, they have released an apology statement on Instagram that says that the winners were selected at random by a script but there was a waltonchain team member among the winners who excitedly tweeted using the wrong profile. However, damage has been done and price of WaltconChain is plummeting fast. Will it recover? You decide. 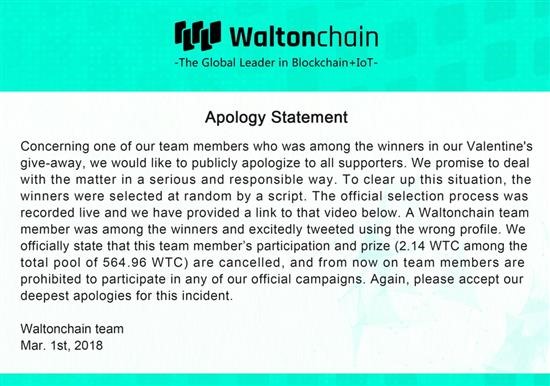 Here are some of the reactions that we thought are worth reading,

Really? You can tell their employee was actually excited. This was a dumb mistake. I love it when people make up conspiracy theories and hope everyone sells so they can buy the dip. It was a silly mistake. Does anyone here they were running a scam for bunch of coins? Really?

To which the Tquix replied,

Hard to face the truth eh? There’s just no way that an actual Team Member (With access to the official Twitter acc) would word it like that thanking the Walton team. A winning team member WOULDN’T EVEN TWEET since it’s bad practice to have internal winners. Everyone knows that.

And here is the best one,

Added this project into my shitlist and I’d never ever invest a dime in it. Here’s the clear scenario: The $WTC guy was super busy in posting replies from his twitter profiles regarding “thank you, my wife’s won” “thank you my brother is in the list” etc but accidentally jumped into the $WTC official twitter account tab in the browser and quoted the reply without noticing it’s an official $WTC account. A team member won and said to himself thank you and wished keep doing the great work? Like seriously?